Annabelle had her two week appointment yesterday and everything is going well.  She weighs 8lbs 8oz so she's passed her birth weight!  The doctor said the jaundice is almost gone and that belly button should fall off any day now.  Since she's been gaining weight we now don't have to wake her every 3-4 hours to eat which is a nice relief!  Last night she slept from 2-5:30 then from 6:30-10:30 and went back down at 11:15, she defiantly takes after Brian and I on the sleeping in (knock on wood) :-)

Uncle Jeff & Aunt Carrie came to visit yesterday afternoon.  I was so happy she was actually awake for some of the visit and they got to see all her funny expressions (gas) and her big blue eyes!  We are looking forward to our first New Year's with her tonight, Brian may have to wake us so we don't miss the ball drop.  Until next time . . . have a very Happy New Year! 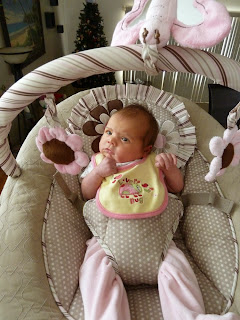 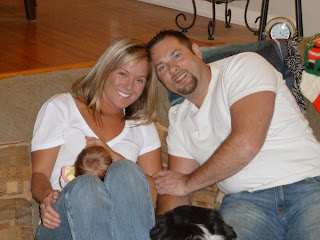 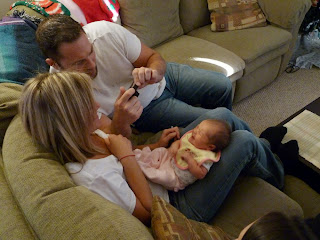 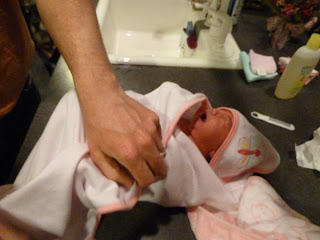 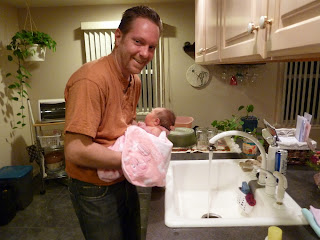 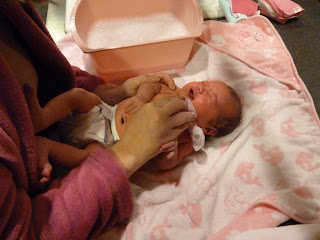 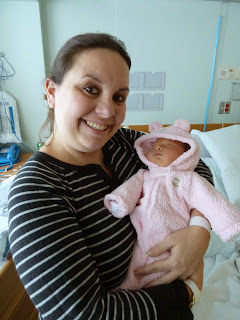 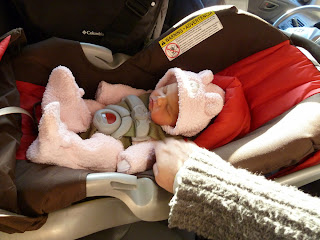 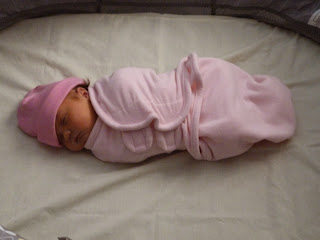 We made it though our first week at home and what a week it was!  When we first got home the dogs were very excited to see both Annabelle and myself but were not sure what to think of the crying.  They are becoming more curious and protective each day as we spend more time with them.  I know that in time they will all be best of friends!

Annabelle & I spent most of the week upstairs in the nursery and bedroom, because of the C-Section I wasn’t very mobile up and down the stairs.  Since then I’ve been feeling better and more comfortable moving around the house with her which is nice for some feeling of “independence” from Brian having to get her every time we wanted to come down.  Although I know he didn’t mind, he’s been wonderful helping out around the house and even with changing the dirty diapers!  You would never know that two weeks ago he had never held a baby, he’s a pro now.

Wednesday we had our first sponge bath at home.  Brian & I managed to make it through in less than &frac12; hour which I thought was pretty good.  It wasn’t nearly as fast as they do it in the hospital but the end result was the same.  The dogs were very curious and sat close by while we bathed her in the kitchen.  They may have wondered why this new addition to our family not only gets to go upstairs but is also allowed in the kitchen when they are not.

We had our first pediatrician appointment Tuesday, Annabelle’s weight was at 7lbs 15oz and everything was looking good.  On Friday we went back for a follow-up to check her weight and the jaundice and she weighed 8lbs 3oz but the doctor wasn’t happy about her color so asked us to go for a blood test to see what her levels were.  Since it was Christmas Eve there were no labs open so we had to go to the hospital for the test.  It came back a 13 which was good as long as she didn’t get to be more yellow in color.  On Christmas we thought she may look a little more yellow, it was really hard to tell so we went back to the hospital for another test which came back the same so we were in the clear.

The five of us had a very nice Christmas.  Annabelle got a bounce seat from Santa that is very girly and cute.  Most of her things are gender neutral so they can be used again if there happens to be a little brother in the future so this was a nice surprise.  Clyde and Apollo both got cookies and some toys which they were thrilled about since they were gated out of the family room while we opened presents all morning.

Now we are just trying to get into a sleeping / eating pattern that we can both handle.  It seems like each day is a new adventure that we have to figure out how to get through.  I’m trying to enjoy every minute, even the tough ones because as Brian keeps reminding me, in a few months I’m going to look back and miss it!